What are the KPIs of KOLs?

After Forbes recently announced this year’s list of top-earning YouTubers , the conversation in the marketing world has turned to how best to measure the return on investment brands around the globe are putting into influencers and key opinion leaders (KOLs). Another question for marketers to get to grips with is does size matter when it comes to selecting which influencer to work with? And what does this mean for B2B marketers and their global brand strategies?

7-year old Ryan made $22 million playing with his toys in the last 12 months. Yes, you read that right. $22 million. Playing with his toys! Regardless of how you feel about the rights and wrongs of this, by filming Ryan unboxing and playing with new toys, his parents have made him this year’s biggest YouTuber. He has over 17 million subscribers and his videos have been watched over 25 billion times. Most of his earnings come from pre-roll advertising, with the rest coming from sponsored posts. He has also just launched his own range of merchandise.

Influencer marketing is now very much part of the mainstream when it comes to marketing strategy. The size of the market is estimated to be $5bn globally, with 54% of this being spent on A-list celebrities. But how effective the strategy is remains up for debate. According to Zine, a company that works with both brands and influencers, companies are wasting over $2bn a year on “lacklustre” results. This is due to poor targeting, follower fraud (which has led to Unilever vowing to never work with influencers who purchase followers), and a disengaged audience. For example, only 0.3% of baby boomers claim to be influenced by influencers, with the majority of consumers saying they prefer influencers who produce authentic, engaging content.

What we are increasingly seeing is that size matters when it comes to influencer marketing, and not in the way you might think. Markerly, another influencer marketing platform, recently reported that micro-influencers, not those under the age of ten like young Ryan, but those with fewer than 1,000 followers, enjoyed the best ‘like’ rates and could be a more cost-effective solution for marketers. Nano-influencers are the next stage of this. These are typically social media users with a three-figure follower count that brands are beginning to value for their reach. The argument is you are more likely to act on something when it’s a personal connection advocating for it than you are if it’s a Kardashian or Rhianna.

For B2B brand strategy, I would argue that this isn’t news. B2B marketers have always known that quality over quantity always wins the day.

“It’s about reaching and influencing the decision makers,” suggests Brandigo’s China President, Mike Golden. “You could invest your marketing budget in one or two A-listers but if you’re a B2B brand and your objective is to generate sales, and the person who makes the purchasing decisions has no interest in the influencers you choose to partner with, then you have just wasted your time and money. But if you can find the influencer who has the ear of that person, even if they only have a handful of followers, your ROI is going to be much more positive.

“I think as B2B specialists our B2B marketing campaigns have always had to be more targeted and focused on the channels that can genuinely enhance our campaigns and offer value for our clients. Back in the days when traditional print media was king, a trade title with a low circulation but one that was read by senior decision makers was as much a valuable placement as a national newspaper mention was to a B2C campaign. The channels might have evolved and moved on but the theory remains the same. Taking China B2B marketing as an example, WeChat KOLs can make a big difference to the success of any campaign but they have to be well mapped and provided with content that is authentic and engaging for their followers for them to add real value.  You can generate as many likes as you like, but if you aren’t influencing those with actual purchasing power then you have to ask yourself just how influential your influencers are.” 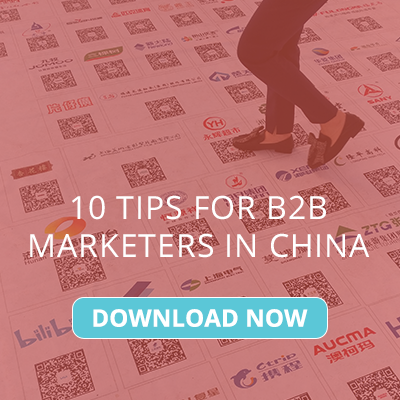 Go Robo – Is Your Brand’s WeChat Ready for Chatbot China?